Exeter City Council is a cost efficient, forward thinking Council, working to reduce its carbon footprint and encouraging others to do the same. A new commitment to make real change and deliver Exeter’s aspiration to become a lead sustainable authority has been embarked on. The goal is to deliver long term financial and carbon savings as Exeter strives to become an energy neutral council. This ambition is supported by an innovative programme of energy efficient and renewable initiatives, financially supported and already producing substantial savings.

The City Council’s target is to reduce its base load energy consumption, deliver financial savings and cut carbon emissions to support Council services as well as supporting the community and business. 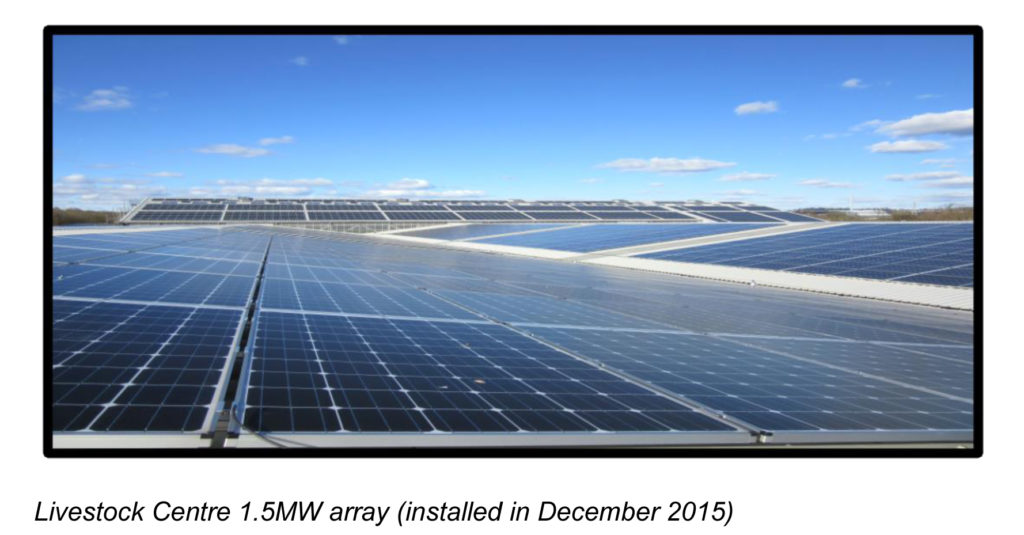 Consumption across all council assets increased in 2012/13 at a rate of 19%. This pattern of energy consumption was unsustainable and presented a real threat to the ability of Exeter City Council to continue to provide quality services. As a result a new fully enabled commercially driven Energy Team was established in Corporate
Property Assets to drive forward a Renewables and Energy Efficiency Programme. The team laid down an ambitious programme to achieve energy reduction, to generate renewable energy, to be an energy neutral Council. In addition, the programme would tackle carbon produced (4500 tonnes in 2012/13) with a 20% reduction achievable by year 3.

The Renewables and Energy Efficiency Programme

Solar PV installed in early 2013 to four main Council facilities proved far reaching and demonstrated the value of renewable technology. To date the PV arrays have exceeded the Government’s performance data by 32%; subsequently the project is predicted to break even within 5 years and will provide an index linked income stream for a further 15 years. This project gave the City Council confidence to invest in its assets and to deliver a sustainable corporate estate.

In 2014 an innovative Renewables and Energy Efficiency Programme prioritised projects with the greatest potential and a rapid business case process was set up to generate approval for funds and fast track member approval for all schemes.

The above projects have all been completed by March 2016 and make up a PV estate of over 2000 kWs. This includes a 1.5MW roof top array, the largest in the South West, producing an income of £150,000 per annum over 25years and supports the term future of the Livestock Building. In addition a pioneering Solar Canopy Car Park project and PV on the Grade II listed Royal Albert Memorial Museum were installed in 2015. PV at the City’s Climb Centre and Citizens Voluntary Service, as well shop units the Livestock Centre are all supplied energy via a Power Purchase Agreement (PPA). A PPA allows the Council to become an energy provider, selling discounted renewable energy to its leaseholders, supporting local business and the voluntary sector with cheaper energy bills.

The solar car park project has broken new ground, not only in the South West, but also nationally and represents innovation that can be shared. The PV arrays, installed on two of our largest City Centre Car Parks, will provide an income of over £50,000 per annum over 25years, generating 285,227 kwh per year of renewable energy, and saving 150 tonnes of CO2 per year. They present: 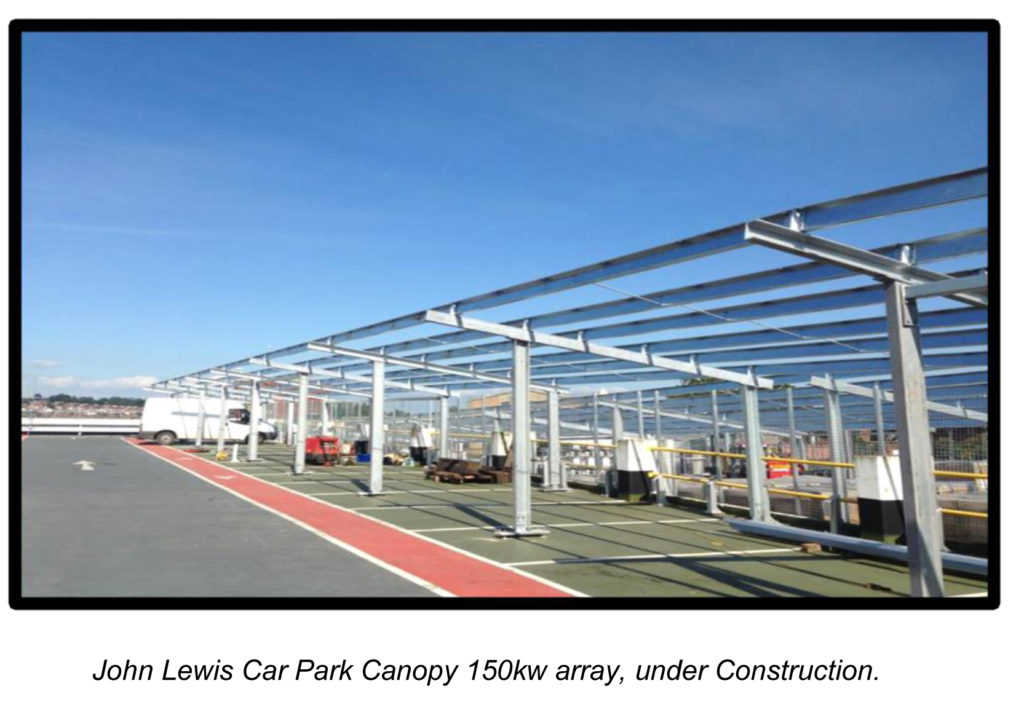 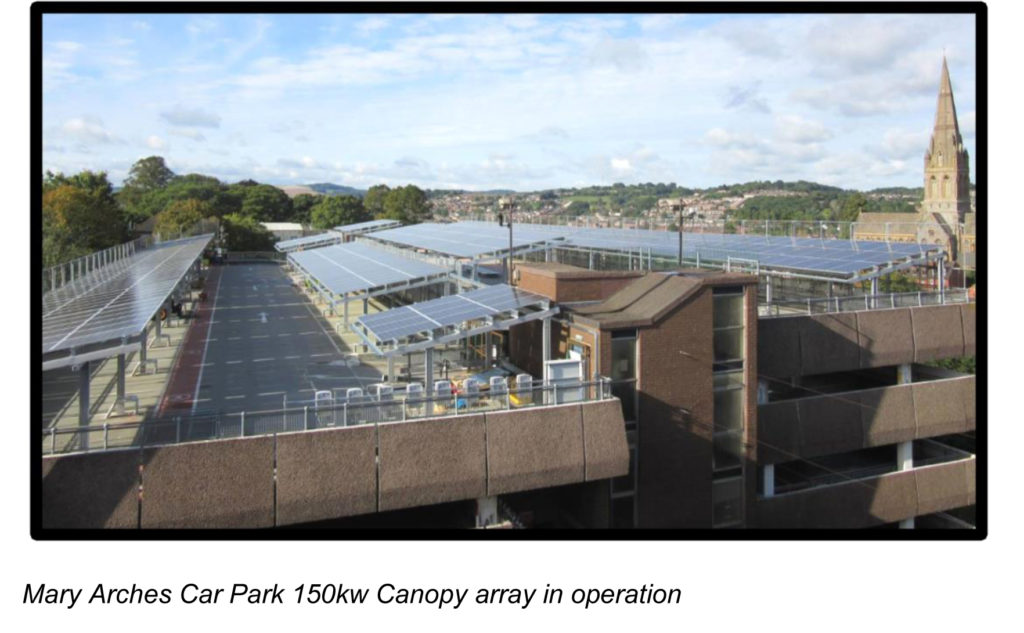 Other Energy Efficiency Measures in Buildings

It can be seen that renewable technology provides for enormous cost savings and delivers long term income. By the same token, key energy saving projects are vital if Exeter is to reduce consumption, carbon and to make for a sustainable property asset.

An LED lighting replacement project at the Council’s main offices has proved a huge success reducing consumption by 60%, demonstrating significant long term energy and cost savings of £32,000 per annum. Additional benefits include reduced maintenance and improved lighting which has made for better working environment.

The success of the LED project is shared with residents to promote the benefits of LED, featuring in the Council’s quarterly newspaper delivered to every home in the City. 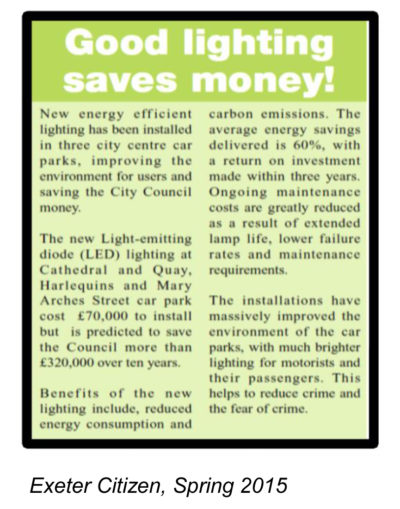 Further energy efficiency schemes include removing paper towels and installation of low energy hand driers, water saving devices and staff engagement which has delivered savings of over £25,000 per annum. New efficient gas boilers installed August 2015 allow for a saving of over £28,000 per annum and removal of oil boilers delivers a significant carbon saving. Space left as a result of the clearing the existing oil tanks has provided for a new bike store for staff, encouraging green travel.

All in all the Civic Centre has been transformed into an energy efficient building, benefiting from significant cost and carbon savings, as well setting an example of best practice. This is clearly demonstrated by the energy consumption graph below. 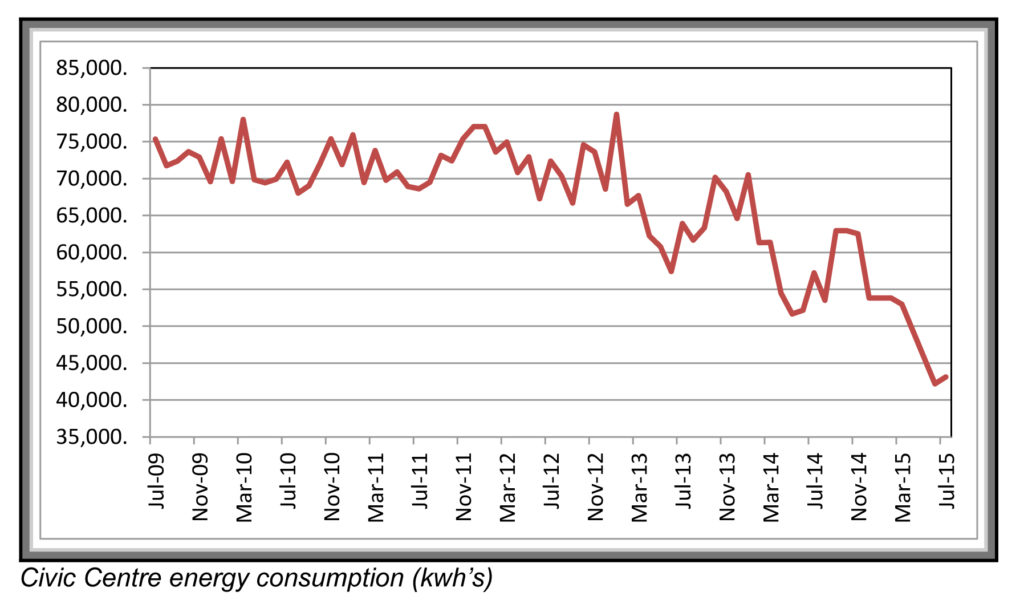 The Council’s aspiration for Energy Neutrality, through self financed investment in renewables and other energy saving schemes, forms an essential cornerstone to achieving a 20% reduction in carbon emissions, whilst essentially safeguarding public services through income generation.

A strategy to deliver an Energy Neutral Council is one built on:

To date the savings are clear, with energy consumption of the Council’s total estate cut by 2.5milllion kwh. Based on projects completed up to December 2015 a reduction of 15.25% is achieved in 2015/16 and a gross income of £319,000. Moreover projects recently completed, all within year 2 of the programme will provide for considerable decline in consumption, a reduction of 37% in 2016/17 and a gross income of £522,000, with a carbon saving of 24%.

The above is the work of a dedicated and enthusiastic Energy Team of two people, that in itself demonstrates real achievement. The projects realised are substantial and already provide real and significant savings, demonstrating leadership for community benefit, and a new culture of energy awareness that stands Exeter in good stead for a sustainable future. The Energy Team’s individual expertise has gained support from elected members, enabling all projects to be self financed by the Council. Future projects planned and future development of the Renewables and Energy Saving Programme will ensure Exeter continues to reduce energy consumed, increase renewable energy generated and achieve its aspiration to be an Energy Neutral Council.

Other Projects and Collaboration

The following projects demonstrate the importance of partnership and provides an overview of other projects collectively making ground breaking steps to be a truly low carbon City.

Last year, the Council underwent a fleet review by the Energy Saving Trust and the first phase of a new electric vehicle fleet operation is underway with electric pool cars and small operational vans already in service.

In addition, as the result of a successful OLEV in 2013, seven twin charging points. The chargepoints, called ‘Plug and Park’ Stations are situated in key city locations. Usage has doubled since 2014/15. 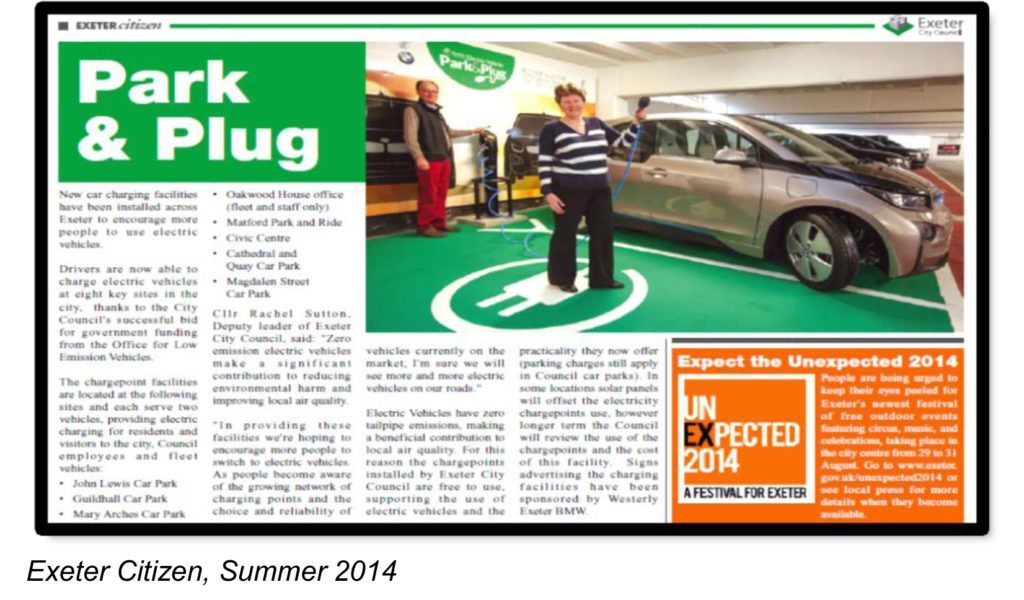 The Council is an active member of the Exeter and Heart of Devon Low Carbon Task Force, an association of public and private sector organisations reporting to the Growth Board for the area, including local authorities, Chamber of Commerce, Eon, the University of Exeter, and the Royal Devon and Exeter Hospital (RDE).

The Council is working with key stakeholders and the Low Carbon Task Force to deliver two district heat networks in Exeter.

The Green Accord is a proven environmental accreditation scheme developed by Exeter City Council, Global Action Plan and key local businesses. It has received national acclaim, endorsement from the audit commission and is a standard used by other public bodies such as Exeter University and the MET Offce. 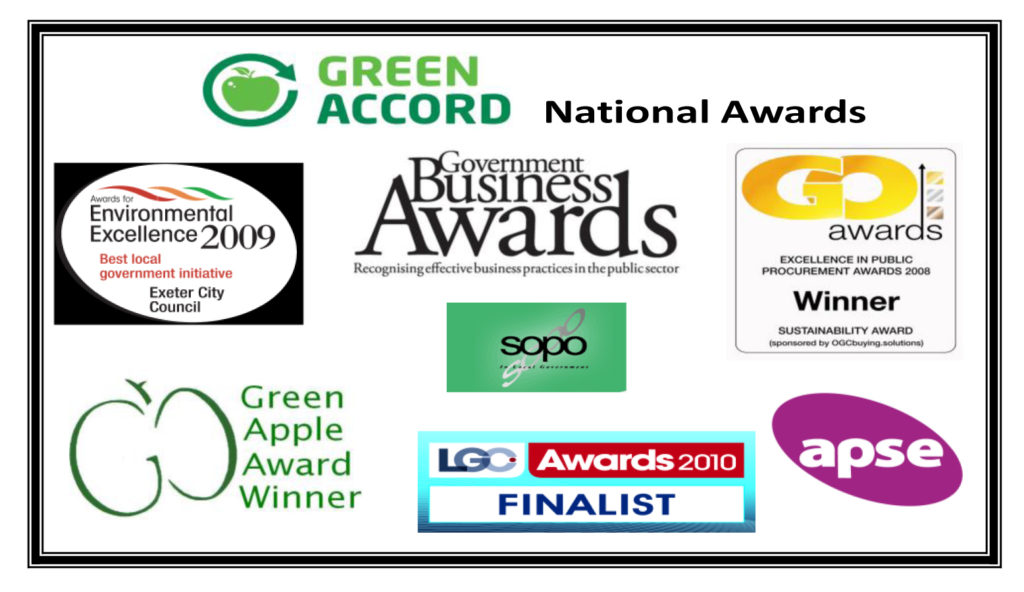