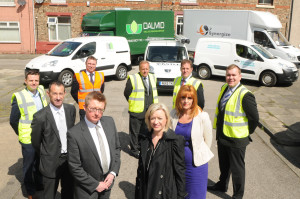 A scheme which has brought warmer homes, lower energy bills and 500 new jobs to Stockton-on-Tees is now being extended across the borough, making it the first of its kind in the UK.

The GoWarm project, run by Community Interest Company Community Energy Solutions (CES) and Stockton Borough Council, has already helped 1700 homes across Stockton and Thornaby to improve their energy efficiency and reduce their fuel bills by up to £750 a year.

Now, after Stockton Council signed an agreement to continue its partnership with CES until 2015, the scheme is being extended to cover the entire borough.

All the borough’s remaining 5000 privately-owned solid wall homes will be offered external wall insulation, free of charge and many will qualify for new boilers and central heating (dependent on qualifying measures and listed/conservation status).

This latest development means Stockton is the first council in the UK to run a borough-wide ECO scheme. It will sustain the jobs of 500 people who have been working on the GoWarm scheme since it launched in 2012.

“Even in tough times, councils can take innovative and ambitious steps to help the people we serve. Extending this work across the borough and targeting thousands of privately owned homes shows we are committed to doing things differently to make a real difference. The hugely successful relationship we have forged with CES will continue to deliver transformational change.”

The GoWarm project has become the largest scheme of its kind to be carried out in the UK.

The first stage of the scheme, which was completed earlier this year, was funded by North Yorkshire-based Eggborough Power Ltd and focussed on properties in Stockton’s Parkfield, Newtown and Mill Lane wards, as well as the Mandale and Victoria areas of Thornaby.

This latest phase, which is expected to be completed by the end of 2015, will cover the rest of the borough and receive ECO funding from leading integrated power and gas company E.ON.

Combined, these works are expected to cut the borough’s carbon emissions by more than 300,000 tonnes per annum and deliver a range of health benefits to those who have previously suffered as a result of living in cold homes.

Karen Hindhaugh, Director of GoWarm, said: “The GoWarm  project has more than doubled in size since it was originally launched and it is thanks to the ongoing support of the the local residents, Stockton Council, our funding partners and numerous contractors, that we are able to increase it once again and offer help to more than 5000 additional homes.

“This will not help only help to reduce fuel poverty across the borough but the associated benefits will undoubtedly have a significant impact on the householders and the wider communities as a whole.”